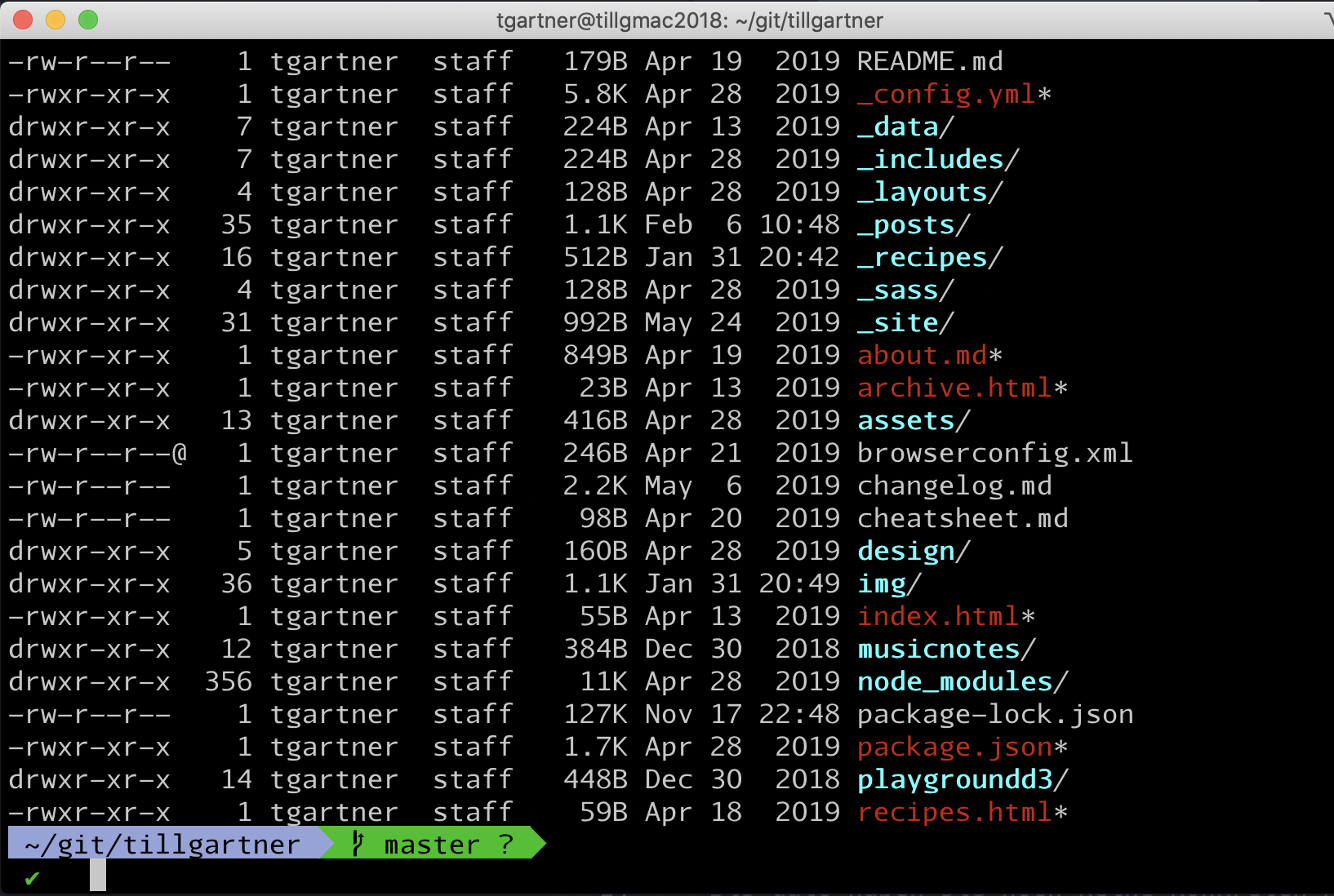 I know, there are lots of articles and explanations out there on how to configure and set up your terminal. Yet, it took me more than 2 hours to get things working the way I wanted. Reason was, lots of the articles and explanations provide step by step guide on installing things, but to little background information on how things relate and work together in the background. And that’s what was missing to me…

So here I go with yet another article. Or rather a collection of snippets of the information that I found valuable.

My target setup & requirements are simple:

What made me get lost, was missing overview. Therefore, here are the different bits and pices that are involved in my setup:

The dependencies in this list are from top to bottom, i.e. the fonts are required by powerlevel9k that runs on top of Oh My Zsh that uses zsh.

Before going thru the different components one by one, this is the directory structure we will have after installing all the bits & pices:

I used bash in the past and I was happy with it. I simply started my Mac Terminal, and there it was. And later I used iTerm2, and it alkso fired up with bash. So why move over to zsh?

This article explains it nicely and extensively. In short:

So anyways, it’s trhe new standard, it looks good - let’s use it. As it’s the new mac standard shell, you don’t need to install it. In case you got a new mac that came with Catalina pre-installed, you are using zsh already. In case you upgraded your Mac from Mojave, you need to set zsh as your terminal shell like so:

This sets zsh as the default Shell.

Configuring the zsh shell is done via entries in .zshrc, which is located in your $HOME directory. As described above, there are a couple of components that interact. Some of them offer configuration options, and can be configured in different locations. In order to keep an overview, I opted for installing the components in their respective default location, and trying to have all the configuration option in the .zshrc file.

Oh My Zsh is an open source, community-driven framework for managing your zsh configuration. – Oh My Zsh website

Bascically Oh My Zsh makes your terminal look very nice (via themes) and offers lots of helpful plugins. An example list from their github page:

I currently use the git plugin, which offers shortcuts for often used git commands.

As mentioned, I have all the configurations integrated in my $HOME/.zshrc file. The relecvant snippets from my .zshrcfile:

Powerlevel9k is a theme for ZSH which uses Powerline Fonts. It can be used with vanilla ZSH or ZSH frameworks such as Oh-My-Zsh, Prezto, Antigen, and many others. – powerlevel9k website

Installing powerlevel9k is straightforward on a Mac with git:

This clones the entire powerlevel9k repo into the right subdirectory under .oh-my-zsh.

Note You can also install powerlevel9k with homebrew, but I don’t know where it ends up. To be investigated… 😀